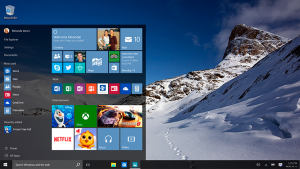 I have been running the Windows 10 Insider Builds for a while now. And getting close to the release date for Windows 10, I was asking myself, what – other than the slightly different look and feel – has actually changed. What are the key new features. Well, Microsoft has setup a page where they detail what’s coming with Windows 10. Microsoft calls this “It’s the Windows you know, only better“. What does that mean?

Well, from that page, I get the following key new features. The stuff that Microsoft puts front and center, the things that make Windows 10 new:

That’s it. I mean this is what they list on the most prominent page, where they explain what’s new in Windows 10. The Start Menu is back. This is the number one feature of Windows 10. It doesn’t look good, by the way. It, very unfortunately, inherits the tile view for Apps and makes the Start Menu blown up and too big. And customizing it is as non-intuitive as it could be. So for users migrating from Windows 7 or earlier, this is not nearly as bad as Windows 8, yet it’s not an improvement either. The fact Microsoft advertises the coming back of the Start Menu as the number one “new feature” is a joke in itself.

The fact “it starts up and resumes fast” and “has more built-in security” as the top 2 new feature. Well, I’d hope that’s a given for any new version of Windows, to some degree. At least security is a strong must-have. Since new versions of Windows take several years, new generations of hardware can mostly take care of making it faster, so I don’t think that’s as critical as having to put it up as number 2, right after the number 1 – it has a Start Menu.

Microsoft Edge is very welcome. Microsoft has made some very unfortunate decisions in the past. Trying to lock users in with IE, by establishing a closed environment with ActiveX and countless other technologies targeted at their Enterprise customers, have made IE so inappropriate that Microsoft now just started from scratch. I think this is a bold move. A very welcome one. Keeping IE in for Enterprise customers, who run custom apps is a requirement, and it underlines how difficult it is to exit from that strategy of trying to lock customers in. Nevertheless, I welcome Edge, and Microsofts attempt at getting better at supporting a more open Web.

What else? What other key features are there? Why should I upgrade?

Well, Microsoft doesn’t explain on this page. But I’m sure there’s more.

If you’re on Windows 8.x, definitely yes! Getting the Start Menu back is key here. I’ve talked to many people, who were completely puzzled after installing Windows 8. Even on Windows 8.1, the experience was not was a Windows user expected.

If you’re on an earlier release of Windows, I’d still say yes. Windows 10 is a lot closer to what you’re familiar with. And it has more security built-in. Staying current is the first and maybe most important aspect of making sure you’re safe. On Windows that’s more important than on other platforms, because Windows undoubtedly is the number 1 target for Malware. At the same time, it is visibly a much larger step than any previous Windows upgrade. Even if we ignore Windows 8, if you jump up from Windows 7 – or any prior release – to Windows 10 there is a learning curve. Don’t be mistaken, it’s not just visual changes.

Overall, it amazes me how much time it takes Microsoft to build a new version of Windows, and how little they put on the list of key new features. And that much of that is pointing out how familiar it is. Not naming Windows 8 by name, but it’s clear that one of the key drivers for Windows 10 is to revert the worst decisions Microsoft made with Windows 8. And while this took a lot of resources, I think it’s a good move.

Windows 8 was driven by the desire to get cross platform. One Windows, for PC’s and Tablets alike. Obviously driven by the motivation to lock customers into an environment they’re familiar with. Like, customers already have Windows. Let’s put that Windows on Tablets (and Phones), to drive Tablet sales, keep customers in the eco system. So it was driven by Sales. It was driven by financial interest. As a result, Microsoft – to some degree – failed to deliver a great experience on Tablets. And at the same time failed to deliver a great experience on PC’s. Windows 10 is mainly trying to correct that. The features listed on Microsoft’s Windows 10 page speak a clear language. And hopefully, for Windows users, this enables Microsoft to get back to innovating – with users in mind rather than dollars.

Parental supervision taken to the next level

Why is there so much violence

The ethics of modern web ad-blocking

The Rough Road to Apple Music

You got to read what you want to...

The Debacle of Google Glass

It’s Time to Split Up Microsoft

Giving Up on the iPad